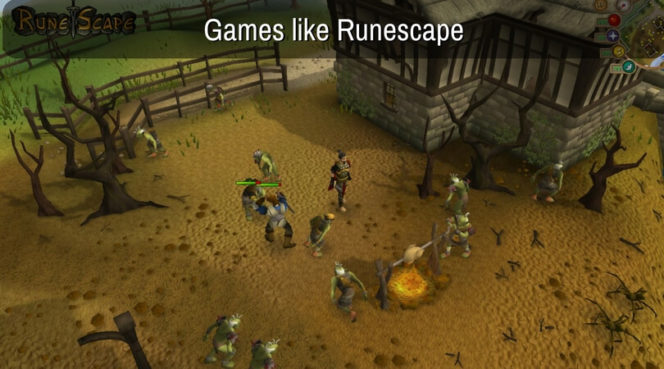 Runescape is a Massively Multiplayer Online Role-Playing Game (MMORPG). This a renowned online game. This online game is one of the most entertaining games of all time.

If you are looking for online role-playing games like Runescape 2020, then you might have come to the right place. Here we’ve listed some of the best MMORPG( Massively Multiplayer Online Role-Playing Game) games of all time. Check out the list below to get lost in the world of fantasy games.

There is no lack of fantasy in this Runescape game. This role-playing fantasy-based game is the ultimate pleasure for gamers. Originally released as a browser version, now Runescape provides the same experience in a non-browser version too.

Sony Online Entertainment develops EverQuest 2. This is an MMORPG game. If you are bored of playing games like RuneScape repeatedly, then EverQuest 2 might be the best choice for you. Create a fantasy character, explore the world of adventure, battle with the monsters, and search for mystery and treasures.

This game offers the same experience as its sequel EverQuest1. The plot of the game is set in the fantasy world of Norrath. EverQuest 2 is packed with excellent features such as diverse races and classes, and customization features.

If you are in search of free games like RuneScape, then this exploration game will be the fittest choice.

Rift is on the list because of its mesmerizing gameplay. This wondrous game is a perfect rival to the fantasy series RuneScape. Rift the fantasy-based online game is free to play. The concept of the game circle around in the fantasy world of Telara.

Six main elements, like Fire, Earth, Air, Water, Death, and Life, are the core and essence of the world called Telara. The plot of the game revolves around the destructive conflict between the Guardians and the Defiant. Villagers and Heroes give fierce competition to other mobile games like RuneScape. This game has many similar schemes, like Runescape. In the game, you can build, craft, fight, customize according to your wish

The game doesn’t need any introduction. It is one of the most popular games among the users. Thus, this super-addictive brilliant game is an excellent alternative in the RuneScape world.

The gameplay of this legendary game circles around the fantasy world of Azeroth. You can explore a lot in this game. From fighting with a massive number of players to customizing your armor and weapons, you’ll experience everything throughout the game.

You can play this game on PC and Mac too

One can select and customize their characters of the game — vast numbers of characters to choose from the plot. You can be a Warrior, a Wizard, or a hunter according to your mood. Explore fun activities like building clans and home, farming, trading, and a lot more.

Darden offers similar experiences like Runescape online role-playing games. This classic game has an early concept of visual and graphics. The storyline of the game revolves around the dark world of Vampires and Slayers.

This unique game gives you the chance to be either a vampire or a slayer. Explore the quest operations and learn exceptional abilities and skills. Darden is deserving to be in the top 10 list.

Finding the best MMORPG game for the iPhone is a hard thing to do. If you are searching for games like RuneScape for iPhone, then Godfire(Rice of Prometheus) will be perfection. This game is full of action and adventure. The theme of the game is Myth and Technology.

According to the main plot, the world of the game is attacked by devastating enemies. And the player has to solve puzzles, battle the enemies, maintain gaming health at each challenging level. With character customization and unique gaming, skills save the endangered fantasy world from the hand of the enemies.

Just like RuneScape, this online game is pretty impressive too. Explore the medieval era after entering the world of Drakensang. You have to pick up your character from various classes like Rangers, Mages, Knights, and Dwarves.

This online multiplayer game has standard gameplays like Diablo. This browser game has various fun activities.

This 2D game is a capable rival to the game called RuneScape. There are several great features to enjoy the game. The visual is incredible and unique.

Dragon Nest will offer you the most enjoyable experience. This game is just as popular as RuneScape. Experience adventure and excitement with this fantasy game.

Battle with dangerous monsters, search for various artifacts in dangerous dungeons throughout the game. Be a part of different rewards, armors, weapons all over the fantasy world.

There is a player vs. player mood available in the game where games can challenge other players to fight.

Gamers don’t have to be a member of any class or clan at the beginning of the game. They can choose their paths independently after gaining a specific ability and game skills gamers can select courses according to their choice. Customize your character in the game without any bound.

Let’s Hear the Minimum Requirements To Play the Game:

Experienced gamers have fun and adventure with these top games. These games are well deserving to be on the list. Play with millions of game lovers all over the planet. And survive the world of virtual fantasy with perfection.

Free online games are increasing in number of users

Most Creative Rakhi Gift Ideas to Impress Your Dear Brother

Coin Master Hidden tips: How to get free spins

Something to Know About OSRS Gold

Play and Download Online Games: How to Pick the Right Site

A lot has changed for online games. It used to be you couldn’t play a game with a friend unless both of...
Read more
Digital Games

Anything free is constantly considered as low spending plan and the vast majority of the people have begun to play portable amusements free on...
Read more