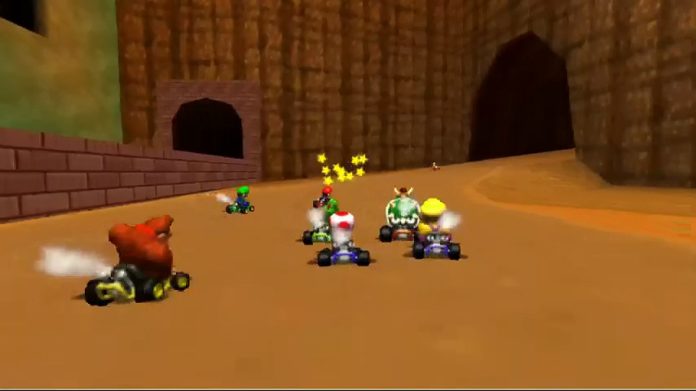 Coming exclusively for the Nintendo 64 console in December 1996, Mario Kart 64 will soon be 25 years old. It is still one of the most successful racing games in the entire lineup about Mario, his friends, and foes. On the days of its release, this game was the most popular among the players around the world. Today, we would like to recall some cool features of Mario Kart 64.

Players received a choice of eight characters and several available tracks, differing in length and relief. The basic game principles in the three-dimensional version migrated from its predecessor, Super Mario Kart for Super NES – a player drove along the tracks, collected random and useful items, overtook other participants in the race, only with the power of kart engine and cunning maneuvers, or using the selected weapons.

To enjoy this game on modern devices, the only thing you need to do is go to the Romsopedia website and find Mario Kart 64. Feel free to call your friends and have fun playing this game. Great emotions are guaranteed!

In total, the game offered four modes to choose from:

The main thing was to acquire the required number of controllers, while the Nintendo 64 console itself supported the connection of four gamepads without multi-tap. The 3D graphics gave Mario Kart racing a dimension that was not available on the Super NES. New graphics laid the foundation for future games in the series like the mega-popular Mario Kart 8 Deluxe.

The head of development of Mario Kart 64 Hideki Konno said that in the original version of the game there was a “no items” mode. The developers planned to allow players to compete in driving without the influence of external factors, but this was not popular.

The mode was specially designed for fans of the F-Zero series. According to game designers, players could have negative comments about items that introduce an imbalance in “fair races”. However, after the first demos of Mario Kart 64, it became clear that no one was playing the game without banana peels, turtle shells, and mushrooms. The journalists unanimously assured: without items, the project looks like a cheap dummy. As a result, they decided to abandon the new regime.

It is curious that having become commercially successful, the game caused a very controversial reaction from critics. Many critics praised and were delighted with the karts with Mario, Luigi, Peach, Yoshi, and others. On the contrary, in other publications, the game did not receive the best reviews and average ratings.

For example, in the Next Generation, the author of the review scolded the graphics, noted a drop in the frame rate when playing two or four, and the so-called “rubber band” artificial intelligence – this is when opponents seem to be tied to the player with a rubber band. But in GamePro, the author praised the graphics, called them amazing and beautiful. However, everyone agreed on one thing – great music, good control and a large number of tracks made the game worthy of attention.

Commercially, Mario Kart 64 is one of the most successful games in the Mario Kart series, with 5.5 million copies sold in the US and 2.24 million in Japan. Mario Kart 64 is a simple racing game for the casual player, but it also contains more advanced techniques to keep experienced players interested. It’s great that this game is also available on modern devices for a new generation of gamers to try it out.