Scary Games to Play with Friends

When it comes to scary games no age is really a problem. We all can have the fun of frightening games either all-alone or with friends, home alone or outside, sunny days or moonless nights. After all, who doesn’t like to play something spine-chilling? So, we have enlisted some of the best scary games to play for all ages.

Scary Games to Play for All

Games are all about having fun, alone or gathered. We should also be careful of not involving in any psychological or physical harm while playing the frightening games. Thus, no game enlisted in this list of best scary games is prone to any sort of danger.
We also understand that a particular game is not always supposed to be played by all. So, keeping that in mind, we have categorized the scary games for kids, teenagers, and grown adults.

Of course, for a kid, its hard play scary games all alone. We have assembled some of the scary games to play with friends, inside a room or outside in the dark.
# Sandman: Get one person lay on the floor with face down and the rest of you will sit around the person in a circle. Get another person in the group as a speaker who will be telling a scary story of how the laying down person was killed. Other players will keep quiet and eyes closed.

Speaker will tell the story of how they were murdered and their body was butchered and then filled with sand. The story can be elaborated in many ways as long as it sounds scary and relatable.
And, while you are telling the story of every body part being cut open, you slightly touch the body part of the laying person up and down. In the end, the speaker will ask the dead person to stand up but they will feel heavy as their body is supposed to be filled with sand.
This is one of the best scary games to play at sleepovers. 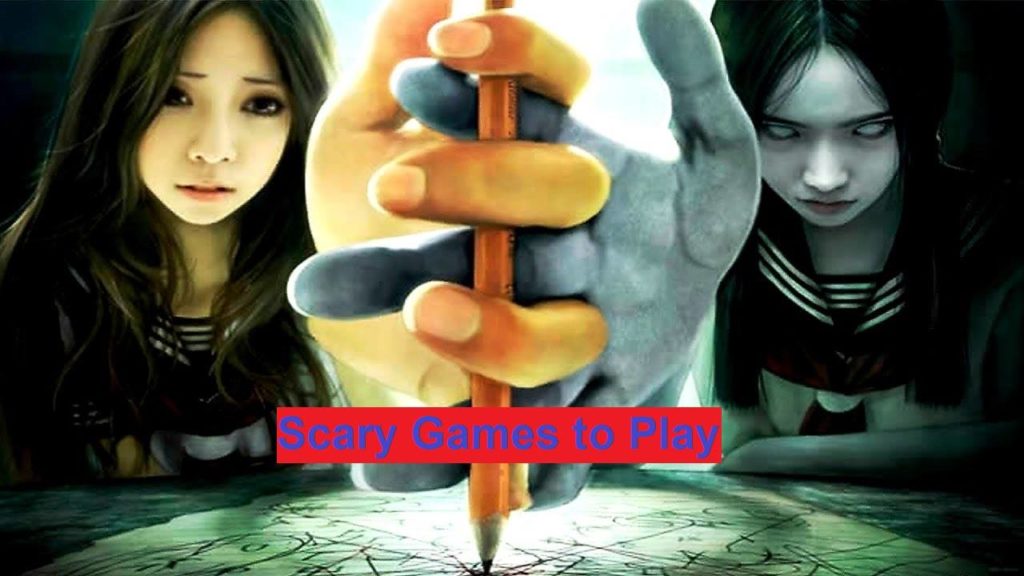 #Zombie Tag: One person acts like a zombie and tries to tag the rest of all. Once any one of them is being tagged, they also become a zombie. This tagging will be continued and more people will be acting like zombies and work together to tag the rest humans until only one human is left. This is a fun scary game to play at night and outside.
#Monster Tag: This scary game for kids is another tagging version. Every player in here is a monster and will be trying to catch other ones. A play area should be designated and when a player shouts “Go!” every other player will try to sneak up to one another and tag. When they tag someone, they will yell “Got You!” and the one who is tagged will be out of the game. The last person remaining will win the game.

No matter how old you are, if you play in the dark, even a simple game becomes frightening. Scary games for teenagers should also be twisted enough to give real fun. And, if you choose to play games in the dark, we know it’s going to get you Goosebumps at times. So, here are the best scary games to play at night for teens.

#Calling All Ghosts: You don’t believe in ghosts? No problem. No hunted place? No problem. All you need is a dark place and a small scary imagination of yours. Best you can consider this as one of the scary games to play outside. But, this will terrifically do even in a dark room as well.

Everyone in the game can take turns to call for a spirit or ghost. Summon them softly at first, and then encourage them more. You can try any method you feel effective. No can’t be sure if there will be a ghostly visit. Even if no spirit appears, it’s quite fun trying. And, guess what, it works most of the time.

#Seek And Kill: You must have played Hide and Seek in your childhood. In your teenager, let’s take it a little scarier. Seek and Kill is the scarier version of Hiding and Seek. It adds more spookiness and thrill to the much known scary game we have been playing. This one of the best scary games to play is suitable for both indoor and outdoor where there is enough darkness around.

One among you plays the role of the killer and has to find the others in the dark using a flashlight. The one who’s caught should be brought to the center of the designated place and lie down as dead till the game ends. The one who remains last to find shall win the game and will be the Killer in the next round.

Adults are likely to be mentally stronger than kids and teens. For adults, it takes little more effort to be scared. Thus, we will need scary games for adults with little more thrill, sock, and fright. Hence, here are the best scary games to play for grown adults.

#Ghost in the Graveyard: Another version of hiding and Seek, this game requires three or more players and is played out the door in dark places. One player plays the role of Ghost and hides somewhere in the dark. The rest have to find the ghost. They will remain a safe place called “base” and count slowly till twenty while the ghost player hides.
Whoever finds the ghost will yell “Ghost in the graveyard” and warn all players to rush back to the Base. Then the ghost will have to tag any of the players before they reach to the base. The one who is tagged will play ghost in the next round.

#Scary Stories: This is different in the genre. Well, who doesn’t like scary stories? We all have heard one or other spooky stories. In fact, many of the scary stories we have heard. So, why not share them with friends and find out who has the scariest story of all. Matter of fact, this is safe to play anywhere but one of the best scary games to play at sleepovers or home with family members.
While telling your stories, keep a flashlight on your faces and keep the entire room dark with no lights on. Pass the flashlight to another when it’s their turn to tell a story.

#Planchettes: Planchette, also known as “Little Planks” is one of the most popular scary games to play with friends. You can take many objects to use for this purpose. However, planchette is mostly done on an Ouija board. It takes little time to prepare an Ouija board but you don’t have to buy one. It can be prepared easily.
Adding to that, there is no ritual to be done especially to perform a planchette. If preparing a board is not your choice, you can simply use an empty see-through glass for the game. This is one of the most effective ways to call out for a spirit. But, make sure no weak hearted person is in the group.

#Bloody Mary: This is another one of the most famous scary games to play alone. Yes, this game doesn’t require anyone around if you have enough guts to play it. The process is simple. Go to your bathroom, keep the light off and burn a small candle so that you can see the mirror. Close the door and then face the mirror but don’t look at it yet.
Facing the mirror, say “Blooooody Marrryyyy” their times. After that slowly look into the mirror. You may witness Bloody Mary inside the mirror. Chances are that she might scratch your back, arms or legs, and face. Worse, Bloody Mary may pull inside the mirror and you get stuck inside forever.

#The Invitation: The Invitation is another Planchette like the game where your objective is to invite a ghost in the room. It will require a couple of players. All the players must gather in a circle and hold each other’s hands. Then they should close their eyes say “I trust you” one after another.
Say it individually and once all the participants have said it, then all of the players must say “The door is open, please come in” three times altogether. After that, all the players should open their eyes to witness something spooky in the room.

Got Goosebumps Already?
These games are as scary to play as it sounds. Whether you are an adult or just a kid, striving for a spooky thrill? Try out these games with friends or alone, in a room or outdoor, but make sure you have enough strength to sleep alone. If you have any idea scary games to play, share it with us.

Anything free is constantly considered as low spending plan and the vast majority of the people have begun to play portable amusements free on...
Read more
Digital Games

The generation gap is one of the common and the biggest problems of the today’s world. Children love to play games on play stations...
Read more
Digital Games

How to Date in Clash of Clans?

How long have you been playing this stunning game of real men? Maybe you spend here too much time to meet, for...
Read more