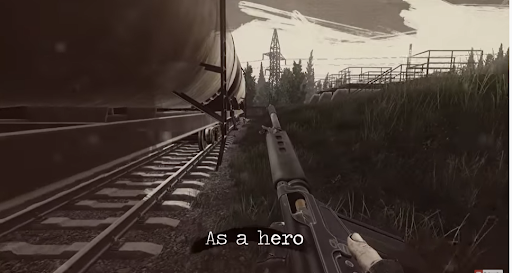 The story of escape from Tarkov is set between 2015 and 2026 in the fictional special Economic zone of Norvinsk. The fundamental is you have to escape from Tarkov in the middle of this war zone. The belligerent and opportunistic locals have armed themselves. They are called Scavs. They are trying to take control of this city.

This game is about realistic gunplay tense scenarios. Death can come very quickly in this game. There will be lots of wounds and blood. The weapons should be kept with care to overcome each level.

The plot is set with lots of chaos and exhaustion. So this game is not for timid-minded people.

Gamers can join as a single player or as a squad. There will be challenging scenarios where you have to save yourself from the scavs attack and in the middle of the session if you find any loot you get to keep them. If you complete the session as alive you get to keep all of it. But if you lose in a gun battle everything will be taken away from you whatever you found in the loot.

Development history of the game:

The developer of Escape from Tarkov was Battlestate Games. The designer was Nikita Buyanov. Some of the staff from the developer team was also from military backgrounds. To make them as realistic as possible they recorded the real weapon sound for the game. With time they brought new updates that include new equipment, a map for the loot, new characters, etc.

Before you find escape from tarkov cheats, let’s have a look at some tips you should know as a new gamer.

5 Beginner tips for Escape from Tarkov :

If you are willing to play escape from the tarkov and you are an absolute beginner, here are some tips for you to start the game as a beginner and become a pro in no time

#1- Buy the standard edition of the game:

On the right side of the screen, you can find the stash. The items that are there in the stash won’t be looted if the PMC is lost in a raid. The left side of your screen is called inventory. The item you get in the raid will be stocked there in inventory. If you lose in a raid the items in the inventory will be lost. All the items that are taken into slots will be taken to the battle with the PMC. You have to understand as a new player how to maintain the balance between how much to gamble in one raid and how much to deck out the character.

Wipe means clean up everything. In this game, wipe means resetting the complete account. Your progress in the game armor weapons and everything you have achieved in this whole time will be lost . Players have to start from scratch. For newcomers, the best time to start playing is the start of a wipe.

Scavengers or scavs are the enemies in Tarkov. You need to save yourself from the attack of the scavs. They are citizens of the city who have armed themselves and are trying to take control of the city. They are attacking the PMCs. Players can choose their characters. Either they can play as SCavs or PMC. But there are also AI scavs available. Not all scavs present in the game are human players.

#5- Extracting Item and Prepare Yourself for PMC raid:

To secure the items that are collected from the raid is to extract them from the map. That is the only way. PMCs and Scavs can stash their loot by extracting them from the extracting point of the map. To extract players need to wait there for the timer countdown. When the timer hits zero they need to move from the point and get cover to be safe.

After a few raids, PMCs can prepare for a raid. The necessary item needed for a raid is weapon armor med. PMCs can buy all these items from traders or flea markets.

Escape from Tarkov is one of the most popular shooting games in recent times, and all you want to do is hide from those scavs and survive the game. Aiming for the villains and shooting them is a risky job. That’s where escape from tarkov cheats helps you using the EFT Aimbot feature to finish the enemies with precision. You can shoot anyone from any position without risking your life and wasting your valuable bullets. So go grab your game and start playing.